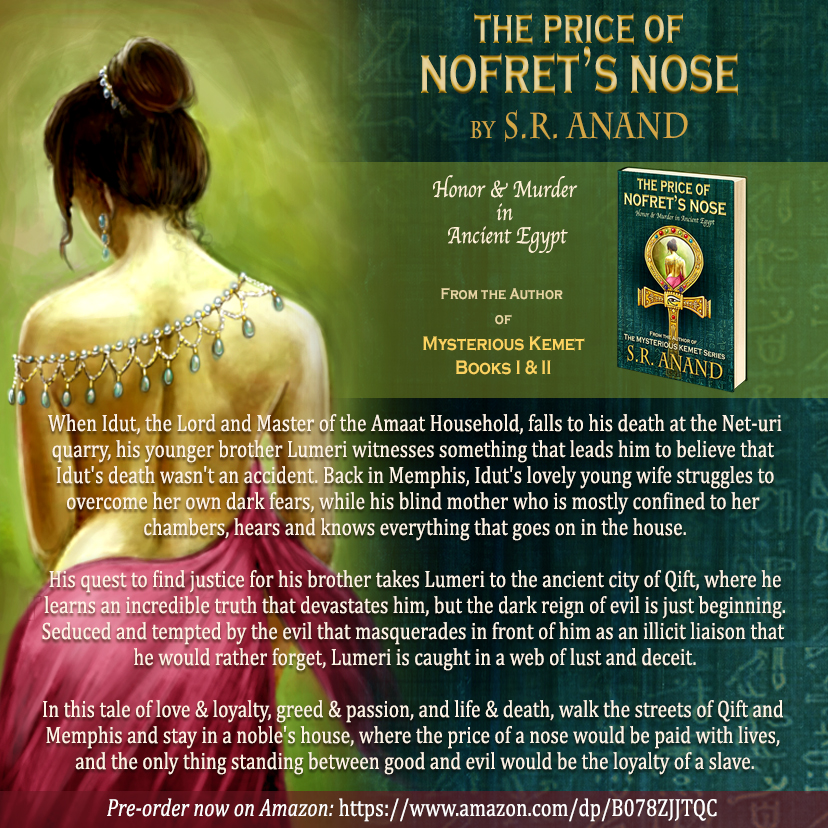 Imba’s hands began slipping down caressing her neck and chest…a token of gratitude – or servitude?

The similarity between Imba’s situation and hers made her cringe. Imba and she were both slaves. They did things because they had to, not because they wanted to.

“Imba, I don’t need you anymore,” Nofret said. The girl’s relief was evident in her alacrity to run and find her faience belt. Nofret passively lay in her bath and watched Imba’s perfect young body as she twisted and turned to clip the belt around her waist.

In two years, I’ll be thirty. The age at which some women become grandmothers!

She slipped back into the water, caressing her own body, trying to discover a wrinkle or a loose fold, but her skin was still supple.

There still is time, she thought.

As Imba walk out of the door, Nofret closed her eyes and allowed her to fall into her private abyss of reflection.

Her life so far had been a rapidly growing collection of regrets.

Twelve years worth of regrets!

Her twelve years of marriage had transformed into a decade of longing and a myriad lost hopes.

If only she had run away with the poet who she had been infatuated with.

If only her father was an Egyptian and not a Philistine on the run.

If only her mother had been of noble birth.

If only Idut had been more considerate and loving.

If only the flame of her desire not singed her wisdom.

The Price of Nofret’s Nose: Honor & Murder in Ancient Egypt is arriving on March 01, 2018. It is currently available for Pre-order on Amazon.

...are the Worlds Beyond our Time & Space. Read more here.
Join 65 other subscribers
Follow Yonder Worlds on WordPress.com